Formed in 2015, Las Vegas-based Hip Hop Jazz band The Lique mixes rap, jazz, soul, funk and rock into a vibrant musical concoction that is determined to not only move bodies but also probe minds.

The Lique’s second album “Times Like These” released in May 2018 follows up 2016’s “Democracy Manifest,” which garnered accolades from media outlets like Las Vegas Weekly, Seven Magazine and Afropunk. Both releases delve into the social and cultural issues, mixing serious topics with a dose of humor and a danceable groove.


The five members of The Lique--MC Rasar, guitarist Sean Carbone, keyboardist Jason Corpuz, drummer Jeremy Klewicki and bassist Nick Schmitt--met and formed in Las Vegas after Sacramento native Rasar moved there to to work as a cast member of the show “Vegas Nocturne.”

Since then, they’ve shared the stage with artists like George Cinton, Hiatus Kaiyote, Lecrae, Flo Rida, JMSN, Emily King, and Big Sam’s Funky Nation and played headlining shows and festivals through the Western US.

While “Democracy Manifest” was a self-produced effort, the band collaborated with producers Vinnie Castaldo (Eddie Levert, The Jackons) and Jim Greer (Macy Gray, Dan The Automator, Foster the People, Chali 2na) on “Times Like These.” The result is an album that infuses The Lique’s jazz foundation and hip hop aesthetic with an R&B and funk flavor.

“While we are a jazz family first and foremost, we love hip-hop and we love classical and all these other things. But there is also a contemporary sound in what we’re doing,” Rasar said. “So I think with this new album, you’ll see a lot of the lessons that we learned traveling so much and realizing that we can continue to expand, because improvisation and adaptability is so crucial to who we are.”

The Lique is on an upward trajectory with their unique sound that fuses jazz and hip-hop. Their performances are alive, upbeat and thought provoking

What The Lique did was blend those rhymes with grooves so funky and smooth, it would have been impossible not to have a good time

When the band’s not indulging in its infectious irreverence, Amani’s spitting lyrics about oligarchies and lobbyists with a snarl 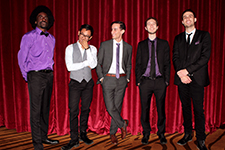 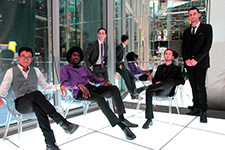 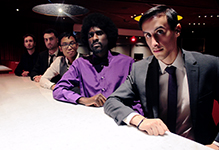